Standing outside of a venue on the corner of 4th and Colorado in downtown Austin, I watched as people were drawn in to the eclectic and colorful sounds being expelled from a rooftop patio.

It was the soulful dynamics of Flamenco Guitarist, Luis Banuelos, establishing an infinitely discreet presence in the musical air space of a place known as the Live Music Capitol of the world. I watched as the warm acoustics infiltrated the minds of a vastly diverse populous, abducting them into a musical trance. It was hypnosis at its finest. I too, had fell victim.

The sounds were compelling. Luis flaunted in articulation as his fingers moved faster than the naked eye could process. At its finale, the crowd exploded with a round of applause and cheers as patrons were lining up to show their levels of appreciation through the traditional applications. I was intrigued to say the least. The performance was an experience that no words can describe; a delicacy to the musical palate. You just have to be there. 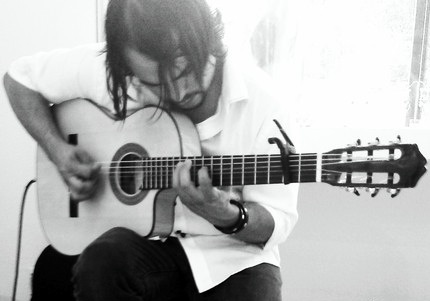 This Independent Artist Spotlight is a story of fight and determination.....

Born and raised in Southern California, Luis Banuelos is the Latin descendent of generations of professional musicians and singers. His late grandfather was a professional singer, his grandmother is a professional singer who still performs weekly, and both of his great grandfathers were professional musicians in Jazz Marimba and Ranchero bands in the states and Mexico. With a musical lineage like that, it comes to no surprise that Luis became a piano prodigy at the tender age of 6. Music is in his DNA. Luis was blessed with a special talent dubbed as phonographic memory, an ability that allows him to learn and compose music exceptionally fast. This is what we call a natural musician.

Fate came on a day when Luis, now 14 years old, was playing hide n seek with his friends. Jumping into a dumpster to elude capture, Luis landed on pile that let off a loud sound. That sound came from a broken Cordoba guitar. Luis retrieved the guitar, eventually fixing it and teaching himself to play at just 15 years old. His phonographic memory, now well developed, allowed him to master the strings early. The rest is history.......

Through the dense midst of genres and cultural influences in his youth, Luis acquired a passion for Soul and Latin Jazz. These influences were delivered by the likes of Carlos Santana, Smoky Robinson, and Lionel Richie, to name a few. Luis’s music career was ultimately inspired by the works of Michael Jackson, Led Zeppelin, and Jamiroquai.

Using classical acoustic guitar theory as his structure, Luis began to compose creative interpretations of Spicy Meringue, Sweet Baroque ballads, and a variety of modern rock and pop hits. Simultaneously, his original compositions contained a dynamic level of texture, depth, and emotion respectively. He played, but to no avail.

Love found Luis and he relocated to Reno, Nevada when he was 22 years old. Working at Guitar Center, Luis got word of a talent show at a local casino. He entered the talent show with over 200 contestants and won with ease. It was then that Luis realized his ability and potential to be grand. Luis booked a few open mics in the area and eventually landed an opening for Robin Thicke at Ultra Lounge. Amazed by his performance, a number of individuals advised that he move to Austin, TX, where the opportunity for him to be discovered would be greater.

Circa 2009, Luis confirmed his job transfer and moved to Austin, TX at his first chance. He immediately began to do open mics and networking in the area to build his career when, unfortunately, his journey took a turn for the worst. He lost his job and due to the financial restraints he was forced to live out of his car a short period of time. Adversities of such would result in most musicians packing it in a finding a job. However, Luis was determined to overcome. It was then that he made the ultimate decision to pursue an exclusive career as a Flamenco Guitarist. Luis adamantly defines this as the turning point of his career. Everyday, he relentlessly practiced for perfection, developing a level obsession for his Cordoba guitar that is unmatched. Booking gigs regularly enabled Luis to come out of his restraints and he was back on his feet with a new outlook and creative momentum. He saved his guitar, and years later, his guitar has saved him. The initial revelations of his journey indicate a love story, a tale of fight and determination. To be continued….

During my conversation with Luis I noticed that a few fingers on his right hand were draped in bandages, worn down from the long hours of practicing and performing. It surely takes a certain level of dedication to master a craft as delicate as the Cordoba guitar. A last, the long hours of practice have finally manifested and the rewards are coming in. When listening to Luis play, you can easily be persuaded of a mythical instrument who possesses its owner, dishing out years of involuntary solitude in return for fame and fortune. Or a folklore of a relic cast away from its origins by the hands of those who eventually became overwhelmed by its powers.

Nonetheless, the story remains synonymous, no pain, no gain.....

Luis has since taken the Austin live music scene by storm. He has quickly become a household name and his unique sound is in high demand. Luis is beginning to catch the attention of bigger events and venues, landing his most notable performances with openings for Max Frost, Del Castillo, Vallejo, and Sahara Smith. He since then has performed for Harry Connick Jr and Lyle Lovett, as well for Laura Bush at the Austin Book Festival. Louis is set to travel to New York in May 2014, where he will perform for the heads of Universal Records. He has also recently landed an endorsement deal with a new adult beverage company, Amoraza Tequila, and will appear in their commercials, both set to launch Summer 2014.

His debut album, Luis Banuelos - Playing a Cloud, is available on iTunes, Amazon, and CD Baby. It is a classic album of original compositions perfect for casual and formal settings. We highly recommend!

Luis is preparing for a budding career as his popularity soars through the roof. He has aspirations to travel the world, adding to the cypher of cultural influences already displayed in his music. Luis spends the day composing, performing, networking, and romancing the nylon strings of his Cordoba guitar.